For Women’s History Month 2018 I plan to make some visualisations of women’s/gender history datasets. I don’t know how often this will happen yet, but hope there’ll be at least one a week.

I’ll blog about them here and post code and data over at Github. The datavizes won’t necessarily be very sophisticated or original, but I’ll try to highlight different kinds of graph and how they can be used to explore patterns in data and start to formulate ideas and stories a historian might want to tell. Some of the datasets are likely to be closely related to my research interests and recent projects, but I hope to find new material from various sources and have some fun with stuff I don’t know much about!

There are likely to be two types of post:
* focusing on women
* comparison of women and men’s experiences

Today’s opening instalment is of the second kind. I’ve started with this one because it’s data I recently created and this is my first chance to do something with it!

Eighteenth-century inquests were usually held within a few days of a sudden, violent, accidental or unexplained death, at a local alehouse, parish workhouse or the location of the death itself. The dataset I’ve created contains a wealth of data that could be visualised, including locations, dates and verdicts. Here I’m just going to focus on a few comparisons of patterns for male and female deceased, using a range of graph types which, as you’ll see, highlight information in different ways. The dataset contains a total of 2894 inquests. A very small number were of more than one person/gender unknown or mixed; I’ve removed those (and for convenience I’m going to pretend that for the remaining 2891, 1 inquest = 1 person, though there might be a few exceptions). 361 were children.

The first graph shows annual counts of male and female inquests, showing clearly that there were considerably more inquests for male decedents than for female. It also shows that there was a lot of variation in the numbers of inquests from one year to the next. 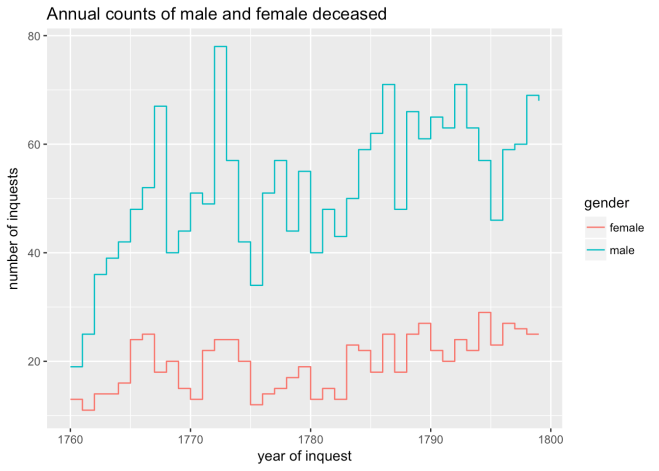 This is also clearly shown by a proportional stacked chart, which also shows that the gender ratio doesn’t vary greatly from year to year, despite the fluctuating totals. This is… curious. 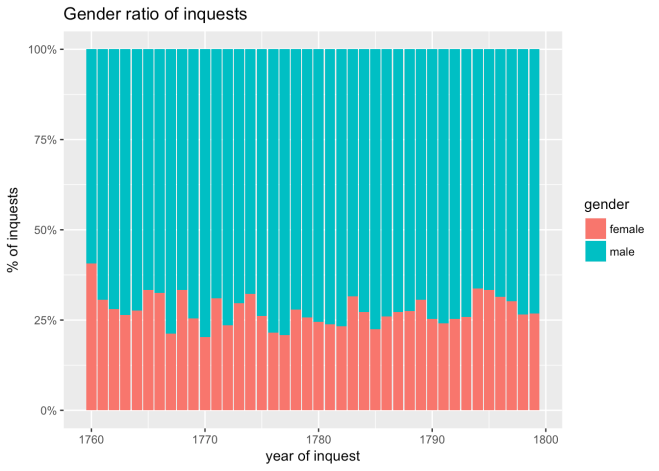 When we take a look at the inquests on children, it can be seen that the ratios appear to be rather more even but also less consistent (which might be expected with smaller numbers). I’d need to look more closely at the numbers with this one, but it’s clear that there is less gender disparity. Why?

(Charts like the last two are brilliant for showing proportions, but you have to bear in mind that they hide the variations in actual numbers.)

Here is another type of stacked chart. The first graph showed the counts for each gender independently; this stacks them on top of each other so you can see both the total numbers and the gender proportions. 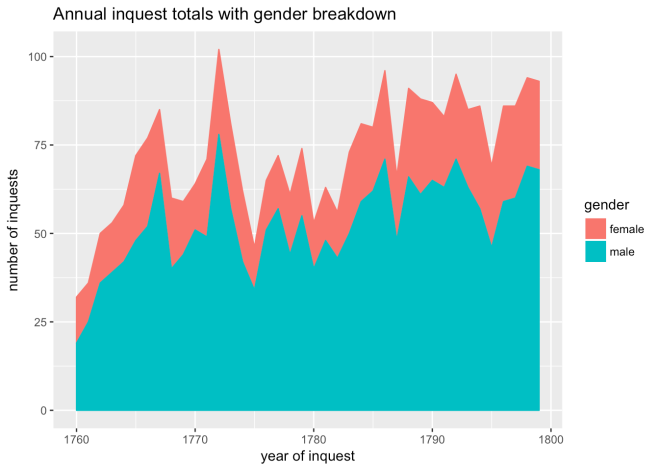 Now I want to take a look at whether there are gendered patterns in inquest verdicts. I can break this down in two different ways. The first shows a breakdown of verdicts for each gender. The most obvious thing to note here is that accidental deaths account for a much higher proportion of the male deaths, which seems likely to reflect that men were more likely to work in a range of dangerous manual trades. Meanwhile, a higher proportion of women than men committed suicide, were victims of homicide, or died of natural causes. (Another time, I might add a third column showing the pattern for all verdicts.)

My final chart flips the breakdown around to compare the gender ratios for each type of verdict. This helps to give a different perspective on to the gender differences.

Here it is again, but I’ve added a guideline showing the average male:female ratio (which is 72.6% to 27.4%). These two charts emphasise that compared to men and boys, women and girls are a) least likely to die in an accident and b) most likely to be victims of homicide – with nearly 40% of homicide verdicts, this is the one category that’s approaching gender parity. Considering that lethal violence was largely a masculine domain (both as offenders and victims), this is interesting – though we shouldn’t forget that homicides account for a small proportion of inquests. 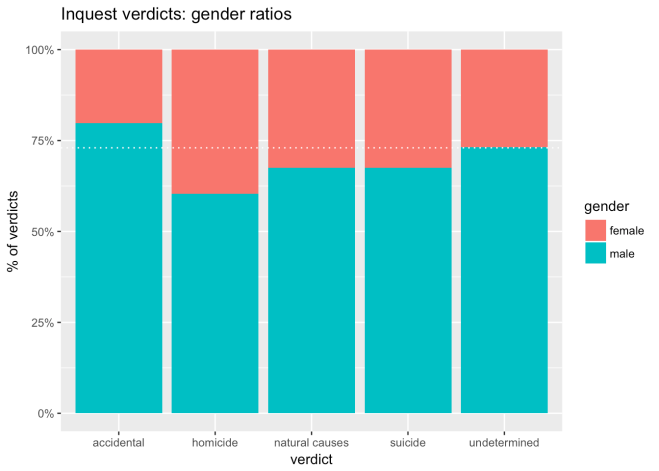 So, based on these explorations I have a number of lines of enquiry to start investigating in more depth, including:

This site uses Akismet to reduce spam. Learn how your comment data is processed.